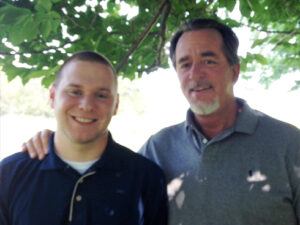 Robert Slocomb, one of our Construction Health and Safety Technicians® (CHST), was recently joined by his son in protecting the safety, health and environment of their community. His son encountered some environmentally unsound business practices and took initiative in the matter. Slocomb shared the following story with BCSP.

Fresh out of high school, our son was looking to start a career in the trades. We didn’t know it, but the plumbing company he started with was a ‘night and day company’; that is, they market one way and then act the polar opposite behind closed doors.

The revealing moment came the Friday of his first week, when he and another young man were sent to a secure storage yard to rake leaves. After four days our son was pretty disenchanted with this company and he planned to give notice. “They’re not doing it right, and they’re really unsafe.”

I should share that I’m a Construction Health and Safety Technician (CHST) certified by the Board of Certified Safety Professionals. His mother and I had spent a week of dinners listening to our son’s complaints about this firm’s business practices. We were pleased he’d decided to quit.

The secure storage yard contained the firm’s septic pump-out tanker, an underground waste bunker, and ten portable toilets. It fronted a road, storefront, and two occupied apartments. Surrounding the fences were scrub trees. And most importantly, thirty feet down-grade was a private lake that fed the town’s fishing pond, as well as sizable wetlands further along.

The owner had ordered the boys to rake leaves onto a large “mulch pile” inside the yard, between the pump-out truck and the building’s back wall. Seeing it, our son immediately got suspicious. “That pile doesn’t look or smell right”, he told his co-worker. The boy said he’d raked leaves over the pile before, and had always wondered what it was. After ten minutes of raking leaves up onto it our son announced that he was certain the pile wasn’t mulch, but human waste.

That afternoon our son quit his job. Over the weekend, the three of us visited a public parking area fifty feet above the storage yard to have a good look at this pile for ourselves. We shot photos through the trees, zooming in. One thing our son said banged in my brain: “There’s not much odor.” We all know human waste stinks, and yet the color was much too dark… I Googled the chemicals in portable toilets. It turns out that a main ingredient used in the mix is formaldehyde. Formaldehyde kills bacteria. Had there been bacteria in the pile they would have been eating the waste, off-gassing and making a huge, detectable stink. The strange dark color was the result of the blue dye used in toilet chemicals.

That Monday I sent an email to our state’s Department of the Environment. I proudly gave details of what our son found, attaching pictures as evidence. Our complaint was then referred to the county jurisdiction where a sanitarian picked it up. For some reason the county people didn’t seem convinced we were genuine. But I remained dogged, so eventually the state sanitarian went over, demanding access to the firm’s secure yard.

In talking to the sanitarian, I added information on the pile’s lack of odor and odd dark color, saying that I was sure formaldehyde was present in the toilet chemicals and that, left out in the open as it was, the seepage threatened a lake, pond, and wetlands downgrade. To my disappointment, the sanitarian told me he left the yard without taking any kind of physical sample from the pile.

Reading the sanitarian’s record of this visit, I discovered that he wrote: “We inspected the yard. We saw human waste, dark colors.” Translation: the sanitarian knew what he was looking at and communicated this to the owner. No sampling was needed because, within a day, the owner called to confess that, indeed, the pile was raw sewage from toilet pump-outs. It turns out he’d been dumping it there for years; ever since his illegal in-ground bunkers were topped off.

“Your activity creates a condition which is detrimental to human health,” reads the Bureau’s letter. “Failure to correct these… may lead to civil and criminal prosecution.” The owner, it adds, “was knowingly causing pollution of ground surface [and] state waters.” On closer scrutiny, they found septic pump-out trucks that hadn’t been inspected in six years, an underground waste bunker that was built without a permit, and a large exposed mound of formaldehyde-laden human waste 6 feet high, not counting tons of human waste in the bunkers.

The firm was ordered to dispose of it all at the waste treatment plant, fill in the illegal bunkers with concrete, and they pulled the firm’s waste-hauling license for an unspecified period. The family who owned the private lake next door was notified that formaldehyde was leeching into their lake, and testing was suggested. Formaldehyde is listed as a carcinogen by the EPA and IARC. Apparently, chemicals and sewage from the firm’s waste pile had been polluting the down-grade lake, pond, and wetlands for years.

In sum, I’m proud of what our son did and how he handled himself in this matter. As for me, I wonder how duty-bound I might have felt adhering to this code of ethics to, above all, “Hold paramount the safety and health of people, [and] the protection of the environment and property…” had I not become a CHST, certified by the Board of Certified Safety Professionals.