His Mother's Injury Lead to Career in Safety For Joe Atkinson 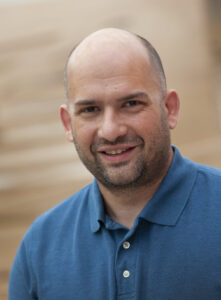 For many safety professionals, choosing safety as their career is a path they may not have always envisioned. Maybe it was something they found while in school or a career move presented to them after they entered the workforce. For others though, safety finds them, and sometimes safety seeks them out through unfortunate means. For Joe Atkinson, SMS, currently in his 15th year of SH&E service, it was a workplace injury his mother sustained while he was a child that would set him on the path to becoming a safety professional.

“My mom suffered a back injury when she was lifting a heavy load off of a cart onto a work bench,” said Atkinson. “It removed her from the workforce and overnight transformed a two-income middle class family into a family struggling to survive.”

Atkinson describes his mother as a proud, hardworking woman who wanted nothing more than to help provide for her family but was left in a position where she struggled to get out of bed every day. “She never returned to work,” he said. “My dad always had a strong a work ethic, but this put it to the test.”

Atkinson and his brother would both enter the workforce at an early age, to help ease the burden that was thrust upon their father. “I remember my father working three or more jobs to put food on the table and a roof over our heads. As soon as my older brother and I were able to work, we did.”

Atkinson began working as a dishwasher at a local caterer where he was eventually let go because he refused to help with fryers as he felt he wasn’t properly trained. He moved on to a supermarket job where, without realizing he was pushing for measures similar to that of a safety professional, he began convincing management to institute safety procedures like holding CPR trainings and adding warning signs to the cleaning chemicals.

“I remember having a manager who was very conscious of making sure aisles were clear and messes were cleaned up,” said Atkinson. “When I would try to convey this message, I often got push back from coworkers, but I quickly got recognized for my hard work and received more responsibility until I was truly in my first leadership role.”

Atkinson would go on to enroll at Embry-Riddle Aeronautical University with his sights set on becoming a pilot. He had previously switched his majors, unsure of what he wanted to do, when he began a course called Safety 101, a prerequisite required for his pilot studies. “That’s when it all clicked,” said Atkinson. He realized going into safety was a good way for him to earn a living and prevent another family from going through what his family had gone through.

After graduating, Atkinson was thrown in the proverbial safety fire during his first SH&E position. After a week of training, his first manager kicked him out of the office and told him to spend time on the floor. “Safety doesn’t happen at your desk,” he recalls his manager telling him. “I learned quickly that while I may know the regulations, if I don’t understand the practical application where the work happens, I’ll never be a true safety professional.”

Now as the EHS Regional Lead at Johnson Matthey and a Safety Management Specialist (SMS) certification holder since 2017, Atkinson is able to look back on his 15-year safety career and see the changes the profession has gone through. He’s watched the profession go from a paper-based one to a more online driven profession where certifications like the SMS can bridge the gap between safety and business.

“The SMS solidified how safety and the business world intersect,” said Atkinson. “I got the SMS to show that I get it…not only that we are in this field to protect the people and the planet, but to protect the business as well. I believe having this certification gives me the recognition of my accomplishments and knowledge in the field.”

Being the safety professional in a company is not without its difficulties, as Atkinson explained, “People aren’t always happy to see the safety guy, but it’s my goal to find out why and help them engage in safety, take ownership, and see safety as a benefit to them and myself.”

For Atkinson, the most rewarding part of working in safety is watching people clock out and say, “See ya tomorrow.” A few simple words are all it takes to validate a successful day of getting his employees out the door and back home safely.