Protecting People, Property, and the Environment in the Wake of 9/11

Three CSP's Harrowing Account of Their Time at Ground Zero 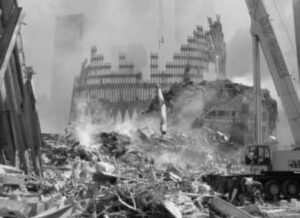 Days after the September 11, 2001 terrorist attack on the World Trade Center, Jeffrey W. Vincoli, CSP, CHCM; Norman H. Black, CSP; and Stewart C. Burkhammer, P.E., CSP, OHST, then BCSP Board Member; faced the enormous challenge of protecting the safety and health of those willing to put their lives on the line in the chaotic environment of Ground Zero.

Black was in New York City the day of the attack and was putting together a team of safety professionals to manage the aftermath as early as that afternoon. The next day, Burkhammer and Vincoli packed into a van and made a six-hour journey to meet Black and begin to bring order to a scene John Henshaw, then Assistant Secretary of Labor for OSHA, described as “potentially the most dangerous workplace in the United States.”

Often lost in the narrative of 9/11 is the recognition that the chaos of that event was not limited to the day of the attack, but was a persistent element days and weeks afterward. In the first week of cleanup, more than 10,000 people of varying skills and specialties converged on the site to help. Despite the hazardous mix of unstable rubble, a pervasive dust, and a strong odor that suggested a variety of chemical fires and biological hazards, there were not only many people on site who lacked proper respiratory equipment, but even a few individuals in t-shirts and shorts.

“In many ways I am proud because I was able to be at the site so quickly, figuring out ways to stop more people from being hurt or killed as a result of this attack. In many other ways, I am frustrated that I was not able to instantly stop all the apparent hazards because of the nature of the rescue-and-recovery process,” said Black.

The environment of Ground Zero was one of extremes. The dust, appearing as snow (or fog, depending on the level of activity nearby), was the most apparent hazard. While concrete became snow, the glass in the surrounding buildings’ windows became a terrible rain – until the buildings were netted the slightest wind or vibration caused this broken glass to free-fall from heights as great as 50 stories. The site also had a range of repulsive smells, all of which became stronger when acted upon by a powerful subsurface heat that measured from 400° F in certain areas to more than 2,800° F in others. “The surface was so hot that standing too long in one spot softened, and even melted, the soles of our safety shoes,” the CSPs recalled.

The Port Authority listed a number of other concerns, which included: that there were tanks containing approximately 200,000 pounds of Freon 22 refrigerant for the heating, ventilation, and air conditioning system located several stories underground; that a tank with 72,000 gallons of diesel fuel used for the WTC’s backup generator and power systems was buried in the basement of the complex; and that an inaccessible third floor of the WTC’s Building 6 contained a firing range where more than 1.2 million rounds of ammunition were located.

Action to secure the area began immediately, and only quick, adaptive thinking could keep those working there safe.

To gain control of Ground Zero, the SH&E team recommended the implementation of a positive access accountability system. A perimeter, the “Green Line,” surrounded the volatile rubble at the site, which was further divided into four zones. Credentialing reduced the number of workers present from 10,000 to a more manageable 2,500.

Workers were given hand-held air horns to signal site-wide emergencies, and two-way radios served to communicate details of a situation while cell phone links served to disseminate news among workers on site.

Haphazard use, or non-use, of personal protective equipment (PPE) was addressed as NIOSH and OSHA set up stations to provide workers with respirators, which were required when working with debris.

These efforts were part of a rudimentary four-part plan that focused on personal health and hygiene, dust control, heavy equipment use, and work zone control. In time, a comprehensive safety policy of unprecedented scope was designed with 26 federal, state, and local agencies acting in partnership with the four primary contractors at the site.

“I am proud to say that during our time at Ground Zero, no one on the site suffered a fatality or serious injury. At least 30 rescue workers’ lives were saved as a direct result of our team’s involvement at Ground Zero,” said Vincoli.

The comprehensive plan developed as part of the 9/11 rescue-and-recovery effort led to many changes in the management of safety in disaster response.

The importance of adequate and functional respiratory equipment was highlighted. NIOSH addressed this with research on the compatibility of respirator components, the ability to communicate while wearing a face mask, and protective gear’s relation to physical or heat stress. OSHA used this information in developing safety training for first responders.

OSHA integrated worker safety and health into the National Response Plan, the plan used by the government in emergency situations, and established itself as the coordinating body in the plan’s new Worker Safety and Health Support Annex. The agency used the worker protection efforts implemented at the WTC to form a National Emergency Management Plan.

Finally, the National Interagency Management System, which defines authority in the event of emergency, is able to make use of the OSHA National Emergency Management Plan and ensure safety with an immediately clear chain of command and accountability.

“After 39 years in the profession, having an opportunity to lead an effort that affected the lives of many was truly overwhelming,” wrote Burkhammer in 2002.

The safety planning developed in the aftermath of 9/11 promises to positively affect the lives of many more these 17 years later.

This article draws in part from an exclusive American Society of Safety Engineers (ASSE) article, SH&E at Ground Zero, utilized by BCSP with permission from ASSE.