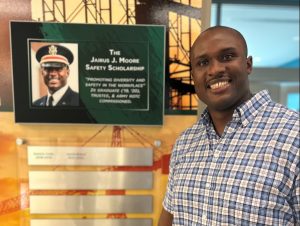 Benefits and assistance are available for military members and veterans pursuing BCSP certifications.

Growing up outside of Pittsburgh in Beaver County, Pennsylvania, Jairus Moore didn’t exactly have plans to join the military.

Sure, his grandparents had served in the armed forces, his mother in the Air Force, and his brother in the Army. Moore wasn’t really dreaming of carrying on any family tradition, though. He even joked with his brother that he would never join the Army.

It may seem unlikely, then, that this BCSP credential holder went on to become a field artillery officer in the Army. But when you realize his passion for keeping people safe, it all kind of makes sense.

It is a passion threaded throughout his civilian profession, his academic pursuits, and his service career – from volunteer firefighter to safety investigator for the Federal Motor Carrier Safety Administration, from a safety management bachelor’s degree to a master’s in criminal justice, and from the United States Coast Guard Auxiliary to the U.S. Army.

“I haven’t encountered a personal dramatic experience that made me want to do safety,” Moore said. “For me it’s more just looking out at the public and seeing people are hurt, things are happening, and if there’s a way I can influence it, I want to be a part of that. I think that kind of got me on my track of getting into safety overall.”

It was a track that really got started in high school when Moore joined the Coast Guard Auxiliary, a civilian volunteer group supporting the Coast Guard’s operation. He remained in the auxiliary as he went through trade school, became an HVAC specialist, and took on his volunteer firefighting role firefighter for the New Brighton Fire Department.

With the encouragement of mentors, Moore then decided to pursue safety full-time. He started by enrolling at Slippery Rock University where he also joined the ROTC. He had one of his most memorable experiences through the ROTC, traveling to Vietnam for a cultural understanding leadership program.

Later, while on active duty, Moore also completed his master’s degree. Today, he gives back to his alma mater to help the next generation. He created and funds scholarships dedicated to diversity and inclusion in both the safety management and criminal justice departments.

Even now, Moore is continuing to grow by pursuing a doctorate in instructional management and leadership from Robert Morris University.

As a graduate of Slippery Rock’s safety management program, Moore earned BCSP’s Graduate Safety Practitioner (GSP) credential, available to those with safety degrees from BCSP Qualified Academic Programs (QAPs). The GSP is a pathway to the Certified Safety Professional (CSP) credential. He now serves on BCSP’s Emerging Professionals Committee, helping to shape the future of the profession.

“It is an honor to have the GSP,” Moore said. “I feel like now that I have this credential, I have to maintain the integrity and the honor behind it. It holds me accountable as a safety professional, being part of the organization and having to uphold certain standards.”

Integrity and honor. Those sure sound like the words of someone who served his country.

After graduating in 2019 and completing the ROTC program at Slippery Rock, Moore commissioned as an officer in the U.S. Army. He was an instructor at cadet summer training camp in Fort Knox, Kentucky, teaching soldiering skills and instructing on how to “call for fire” – identifying the enemy’s location and transmitting grid coordinates to direct artillery.

He then moved on to Fort Sill, Oklahoma, where he went through the rigorous and demanding field artillery basic officer and leadership course. He was in charge of safety for his battery and became an officer in the training room, helping to prepare incoming warrant officers, captains, and lieutenants for their training programs.

“What it meant to me was doing something more, just being a little bit better,” Moore said. “Bettering myself, looking to help other people, and taking up a challenge that, as they say, only 1 percent of Americans do.”

Non-combat injuries from Moore’s training eventually cropped up and limited what he could do in the Army, so he transitioned back to civilian life in 2021. But, of course, he didn’t stop keeping people safe.

Upon his discharge from the service, Moore moved into his current role with the Federal Motor Carrier Safety Administration. Based outside of Philadelphia in King of Prussia, Pennsylvania, he visits trucking companies and conducts roadside inspections to ensure regulatory compliance. He dives into problems to find the root cause and determine how to best correct them.

“I work with local and state police and other government agencies to do these different roadside inspections,” he said, “and to ensure the commercial motor vehicles are safely operating, whether it’s the drivers themselves or the vehicles.”

Moore has taken attributes from every part of his diverse background to make him the professional he is today. His education, work history, and service experience have combined to give him the tools to accomplish his desire of making the world around him a safer place.

“It kind of turned a little bit emotional when I was a firefighter,” he said. “I just saw things happen, people unfortunately are hurt, and I became empathetic. If there’s a way I could shape how things happen or if I can be an influence, I want to.”