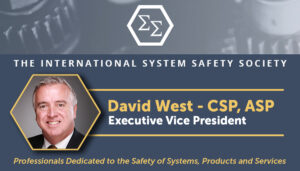 The International System Safety Society (ISSS) is pleased to announce its newly elected officers and directors. Congratulations to Pam Alte on becoming the new ISSS President. ISSS thanks Chuck Muniak for his service as Past President and Russ Mitchell for his years of service as the ISSS President.

This year, the ISSS membership elected its new Executive Vice President and Directors of Member Services, Publicity and Media, and Government and Intersociety Services. Newly elected Society officers and directors take office at the beginning of the Society’s fiscal year, July 1, 2021. We welcome the following to their new leadership roles within the Society. We thank all the candidates for their dedication and willingness to serve.

Dave earned a B.S. in Nuclear Engineering from the University of Cincinnati. He served on BCSP’s Board of Directors from 2008-2013 and chaired the G-48 System Safety Committee from 2010-2019. Before joining BCSP’s staff in October 2017, Dave worked for over 27 years at SAIC where he began as a Staff Engineer and ultimately served as Vice President and Deputy Manager of a 1000-person operation.

In early 2018, Dave was appointed by the Acting Administrator of NASA to serve a six-year term on NASA’s Aerospace Safety Advisory Panel, a nine-member panel established by the U.S. Congress over 50 years ago and charged with advising the NASA Administrator and Congress on safety matters involving the U.S. space program. Dave has been a speaker on safety topics at many national and international events, including the First International Helicopter Safety Symposium in Montreal in 2005, the FAA 9th Annual Commercial Space Transportation Conference in Washington, D.C., in 2006, the Australian System Safety Conference in Adelaide in 2013, and numerous International System Safety Conferences in the U.S. and Canada from 2001 to the present.

Rita has been a Software Safety Engineer with APT Research Inc. for more than three years and has worked in safety, quality, and developer roles over the last 30 years. She served as the President and Past President of the ISSS Tennessee Valley Chapter for the past three years. She has also held leadership roles in the American Society for Quality (ASQ).

Donald W. “Don” Swallom is a Safety Engineer with the U.S. Army Aviation and Missile Command Safety Office. Don holds a Bachelor of Science in Engineering Sciences from the United States Air Force Academy and a Master of Science in Systems Management from the University of Southern California.

Prior to his current position, he served as a helicopter pilot, staff officer, and developmental engineer in the United States Air Force. His last Air Force assignment was as the Chief of Safety for the Arnold Engineering Development Center, the world’s largest complex of aerospace ground testing facilities. He collaborated on the system safety chapter of the Handbook of Human Systems Integration (John Wiley and Sons, 2003). Don is a Fellow of ISSS and a two-time Past President of the Tennessee Valley Chapter. He has served as Chapter webmaster since 2005.

Director of Government and Intersociety Services – Yawa Adonsou, U.S. Dept. of the Navy

As a safety analyst, Yawa spent the last seven years providing System Safety Engineering and Management support for military systems. Her interests in System Safety Engineering and Management started in 2014 when she was touring with System Safety Branch in China Lake, California. During her internship, Yawa was excited to learn about system safety engineering principles and their applications to different disciplines. Since then, Yawa joined the system safety branch and strives to ensure enough safety measures are implemented in systems where required.