April 28 Dedicated to Workers’ Memorial and World Safety and Health 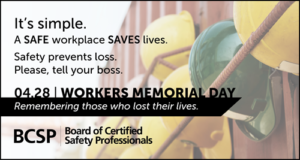 April 28 is both World Day for Safety and Health at Work and Workers’ Memorial Day. Both events are dedicated to looking at our past in order to plan for and create a safer future. We hope that you will join us in remembering those who lost their lives on the job, as well as take time to reflect on how far the safety profession has come and how much work there still is to do.

The International Labour Organization (ILO) estimates that each year, nearly two million people die due to job-related accidents and illnesses. Workers’ Memorial Day began as a way to honor and remember those who perished while working, as well as serve as a reminder to all that safety in the workplace is important and accidents are preventable.

Started in 1970 by the American Federation of Labor and Congress of Industrial Organizations (AFL-CIO), Workers’ Memorial Day was declared in the U.S. to honor the millions of people killed and injured on the job each year. A year later to the day, the Occupational Safety and Health Administration (OSHA) was formed.

Workers’ Memorial Day has since expanded worldwide and is recognized as an international day of remembrance. Events are held throughout the world and workplaces are encouraged to raise awareness for employee safety.

World Day for Safety and Health at Work

The ILO estimates that the number of people who die each year while in the workplace is increasing, partly because of the rapid industrialization in some developing countries. World Day was started in response to that rising number. The goal was to highlight the need for worldwide preventative safety culture in an effort to reduce workplace deaths, injury, and illnesses.

In 2001, the ILO recognized Workers’ Memorial Day and declared it World Day for Safety and Health at Work, a year later becoming a United Nations official day.

This year, inspired by the ILO’s centenary anniversary, World Day will focus around remembering the previous 100 years of work in improving occupational safety and health, and using what we’ve learned to explore ways to improve safety efforts in the future. This can be accomplished through major changes in technology, sustainable development, and work organization.

April 28 marks only the beginning of a worldwide series of events that will span the remainder of the year. Included in this campaign will be a report done by the ILO which will share their story of 100 years in saving lives and promoting safety; it will attempt to capture the evolution of safety and health. The report will also touch upon changes in work arrangements, technology (i.e., automation/robotics), demographics, globalism, climate changes, and other factors that affect the dynamics of safety and health at the workplace.

Also featured are 33 original testimonies from people in the occupational safety and health community from around the world.

We remember the sacrifices those before us experienced, some paying the ultimate cost. Learning from our past, we will create a safer future. BCSP wishes everyone a safe and happy weekend. Remember the dead — fight for the living.