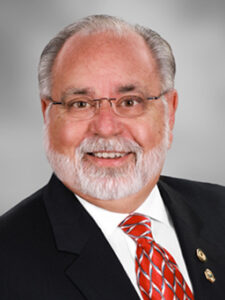 James “Skipper” Kendrick, CSP, CIT, FASSP is President of Kendrick Global Enterprises, LLC a consulting firm specializing in leadership, management systems, safety, education and training processes. Retired from Textron, Inc. as the Global Director of EHS Training, he also served as Corporate Manager of Safety and Industrial Hygiene for Bell Helicopter. Skipper is experienced in the aerospace, manufacturing, maritime, construction industries in addition to being an expert witness.

Skipper has served the American Society of Safety Professionals at various levels to include Chapter President (Greater Baton Rouge and Fort Worth), Region III Vice President ultimately being elected to the Society’s Executive Committee culminating as President and Chairman of the Board in 2003-2004. He is the author of ASSP’s original Certificate in Safety Management program and has over 34 years developing, facilitating and conducting a wide variety of professional development and educational programs for the Society. Kendrick is also an instructor for the University of Texas at Arlington’s Division of Development OSHA, Environmental and Safety programs. He is a former adjunct graduate instructor in safety management systems for Southeast Oklahoma University’s safety department.

The safety career path began for Skipper in August of 1960 at the Louisiana Youth Safety Council camp. Experiences growing up as a country boy as well as a shop teacher, industrial arts educator, professional musician, in addition to his varied services mentioned above have helped shape his two primary visions. In order to achieve excellent safety performance, we must “Make It Personal” and “It is not about how safe you are, it’s all about how safe you could be”.

He is a proud husband to his wife Becky and father to daughter Jamie Kendrick, MD.